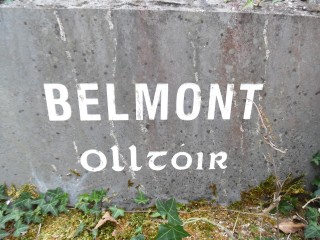 A hilltop enclosure is encompassing the summit of Belmont hill in undulating grassland. A large subcircular enclosure, in fair condition is defined by a bank and external fosse. Traces of an outer bank are visible beneath the modern stone wall which encloses the hill summit. Traces of an outer fosse at an internal stone facing is visible along the inner bank.[1]

A burial ground is situated within the hilltop enclosure. On the 1st edition of OS 6-inch map, 2 small enclosures are depicted in the interior: (a) an unnamed oval enclosure on the hill summit, and (b) a small circular enclosure named ‘Burial Ground’, directly inside the bank of the hilltop enclosure. However, the time of the 3rd edition of the OS map, the latter has disappeared and the words were appended to (a) No visible surface trace of survives but comprises a roughly oval enclosure defined by a stone wall with a narrow entrance. The interior rises steeply to a flat summit by a solitary tree. Beside the latter are 2 inscribed grave slabs, one of which is dedicated to George Blake and dated 1840. A number of other rough stone grave-markers are also visible, including 2 probable children’s graves.[2]

A mound is situated on an east facing slope in grassland which overlooks a bog.[3]

A poorly preserved circular cashel defined by a collapsed drystone wall is situated on a south facing slope in grassland.[4]

A circular mound classed as a crannog, overgrown with hawthorn trees is situated in marshy land close to the west shore of Altore Lough.[5]

A hachured area marked on the 1932 edition of the OS 6-inch map was identified as being a quarry.[6]