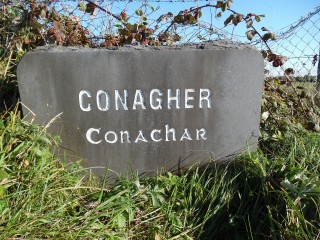 The National Monuments Service (Archaeological Survey of Ireland) provides information on the following: 2 ringforts, a souterrain, a children’s burial ground, a church, a road, a watermill and a leacht cuimhne.

A ringfort is situated on a north west facing slope in grassland overlooking bogland. It is a subcircular rath which is in fairly good condition, defined by 2 banks and an intervening fosse.[1]

A souterrain is situated within the south west quadrant of a ringfort (GA004—009—-). A landowner remembers a cave which people would go into but he could not describe it. A pile of rubble marks its position.[2]

A children’s burial ground is located on the summit of a knoll in hilly grassland overlooking bogland to the north. It is a subrectangular unenclosed area. A number of small set stones are visible, indicating graves. There are a number of large slabs placed around a bush which forms a small altar area. According to local information, adult human bones (about 6ft tall) were discovered nearby.[3]

A second ringfort is located on a south facing slope in undulating grassland overlooking marshland.[4]

A church is located on a small glacial knoll. No visible surface trace survives except for a rectangular pile of loose rubble.[5]

A road (gravel/stone trackway – peatland) was located close to the south bank of the Dalgin river. This was discovered by a local farmer during land reclamation when deep ploughing of a bog took place.[6]

A watermill was located on the south bank of Dalgin river. A long plank of wood, mortised at each end and a pointed wooden stake were found in a cutaway bog.[7]

A leacht cuimhne is situated in grassland. It is a roughly circular cairn composed of loose undressed stone.[8]