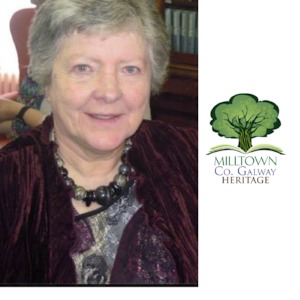 During an interview with Mary Walsh, she remembers shops & pubs that were in existence in Milltown when she was younger. She describes the animals her family had on their farm and the house chores she used to do!

Burkes had a shop, that’s where Billy Burke is. We used to go in there after mass for the sweets……………Grogan’s………………..Mullarkeys, a pub, the men used to go in after mass, they’d be talking the farming…………and then Glynn’s, the hardware……….Flannery’s and the post office, they had a little shop and Sheridan’s used to have beautiful toys out on the window at Christmas. We used be looking in at them………………Burkes was, of course, our nearest shop. We used to in for the sweets and shopping when we’d go to town, go down for messages, go down as far as Burkes.

They had sheep and cattle and a few cows and chickens and turkeys for the Christmas. Mammy’d sell the turkeys for Christmas and twas great.

I just remember about going around the house and working around, making the churn and making the butter that time, baking and that, they usen’t buy much butter cos they’d make it out of their own milk. The brown bread was nice…….twas all done on the open fire. People didn’t take any notice really because the fireplace was very big, they’d have a crook for hanging pots.

Oh, it was great for the footing of the turf and the crowd used gather for the tea, for the dinner and tea…..Changes…..They go out for meals and it’s a different way of life altogether.