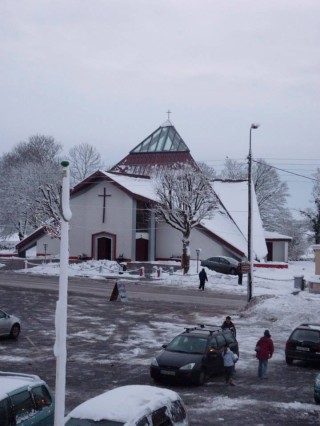 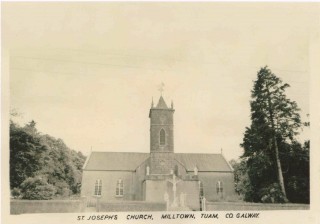 This church, designed by John Thompson and Partners, Limerick, provides a focal point in the centre of Milltown village, with its soaring pyramid shaped copper roof, crowned with a cross. Built in 1969/70 at a cost of £75,000 and dedicated in August 1970, this was a very modern church for its time. It incorporates many features recommended in Vatican II, most noteworthy its freestanding altar on which the main building lines converge. It replaces the old St. Joseph’s Church built in 1831 following the repeal of the Penal Laws.

Large stained glass windows adorn this church. On the left of the nave a small panel contains an image of St. Joseph the Patron of the Parish, and on the right is an image of the Virgin Mary with the Infant Jesus framed within a simple single lined mandorla. Figurative scenes have been kept to the bare minimum. The main type of ornament used consists of combinations of coloured abstract shapes used cleverly to refract the suns light. The studios responsible for making and supplying the windows and the Stations of the Cross are the Abbey Stained Glass Studios of Dublin managed at that time by the late Frank Ryan. The stained glass windows were designed by George Walsh, and painted by William Earley, both renowned Irish stained glass artists. The Stations of the Cross are black on a white background and were cut into the plasterwork. They were also designed and executed by George Walsh. A smaller more intimate Prayer Chapel to the side of the main provides a space for smaller groups.