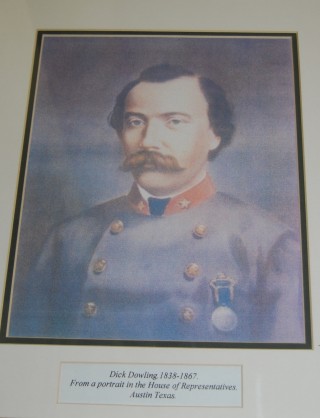 Richard William Dowling was born in 1838 at Knock, Milltown where the O’Connor family now reside. He was born into an era when the Irish population was about eight million and a great famine was just around the corner. The failure of the potato crop in 1845 led to a famine which denuded the countryside of its many dwellings and more importantly its people.

During this time thousands of Irish people took the coffin ships to America to escape hunger and death. Patrick Dowling, his wife Bridget and their six children were some of those who hoped for a better future in the “New World”. They left Knock in June 1846 for America, sailing from Galway to Queenstown (Cobh), then on to New Orleans via Havana. The Dowling family settled in Houston,Texas.

Dick Dowling, son of Patrick and Bridget was nineteen years old when he opened a saloon in Houston in 1857. The saloon was a popular hangout for other Irish immigrants. The speciality of the house was a drink called “Kiss me Quick and Go”. He later sold the saloon and opened a bank.

The American Civil War started in1861 lasting until 1865. When Dowling enlisted in the Confederate Military effort an Officer ordered him to gather his own troups. He recruited his Irish friends mosty stevedores or  “Dockwallopers” from Galveston and Houston. One writer describes them as “brawling, claypipe smoking, Irish jigging lot”. The unit was known as the Davis Guards.

General John Bankhead Magruder, who was the Confederate Commander of Texas learned that a Union Armada of twenty two navel transport boats carrying a few thousand men, spearheaded by four navel gun bouts was heading from New Orleans to invade Texas. The plan called for a landing  at Sabine Pass on the Texas /Louisiana border, a place where the Sabine river flows into the Gulf.

The Davis Guards were deployed to Sabine Pass to defend it against the Union invasion. The unit consisted of forty seven men under the command of Lt. Dick Dowling, who was acting as commanding officer in the absence of his ailing father-in law, a man by the name of Odlum, a Quaker from Co. Kildare.  Dowling’s men waited until the union gun boats were within firing range of their six cannons. The battle lasted forty five minutes, the Davis Guards captured two gun boats, inflicted fifty six casualties, captured about 350 prisoners and put the rest of the flotilla to flight.

The Battle of Sabine Pass occurred on September 8th, 1863. Every soldier in the Davis Guards survived the battle. The people of Texas  hailed the unit as  heroes. The people of Houston presented Dick Dowling with a medal for his dramatic victory at Sabine Pass, the only one ever to be presented to a Confederate soldier during the war.

Of course, the battle didn’t alter the Civil War’s ultimate outcome, but it inspired Jefferson Davis (Confederate President) to declare it a victory “without parallel in ancient or modern War”.

Dick Dowling resigned from the army with the rank of Major in 1865. In civil life he dabbled in real estate, helped to organise Houston Street car company, owned half an interest in a steamboat and a bonded warehouse in Galveston.  He is also reputed to have set up Texas’ first oil company in partnership with two others.

In 1867 a terrible yellow fever epidemic struck this area and claimed the life of Dick Dowling on September 23 of that year. He was 29 years of age. His parents also died of yellow fever. The people of Houston erected a granite statue of him in 1905. There are still reminders of him in the city – Dowling Street, Dowling Middle High School and also Tuam Street.

Mrs Ann Caraway Ivans of Houston is Dowling’s great-great-grand-niece, she is at present researching a book on the life of Dick Dowling, and I would like to thank her for giving me the above information. She intends to give a talk on the subject to the Old Tuam Historical Society in the near future. Dr. T. Claffey  noted historian is helping her with her research.