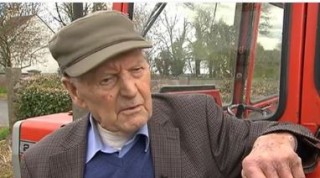 A man born before the Easter Rising will be centre stage at a 1916 commemoration in County Galway this weekend. Jim Burke Daly will raise the Tricolour as part of a special event in Kilconly to mark the exact anniversary on Sunday.

Few can say they have lived through every moment since the first steps towards nationhood in 1916 but it’s something Jim Burke Daly takes in his stride.

“I have nothing to worry about. During my time whatever way things would go or not go, I was away happy.”

Born in January 1916, he says he’s as active now as he’s always been and as the centenary of the rising nears, he’s been recollecting pre independent days.

“I remember the times the tans came over here. They passed up me at home on the big lorry and there was a heap of them within the back of it. You could see the guns hanging out of them. They went up the village and they started shooting the bloody hens.”

On Sunday Jim will be a guest of honour at a special event in Kilconly where he’ll raise the Irish flag. There’s been a big local effort to prepare for the day.

[Bride Brady] “Our hope would be future generations will remember and commemorate the heroes of 1916 and the War of Independence and that hopefully in fifty years time, they will go on to commemorate the 1916 rising again.”
In common with many other towns and villages around the country, people here have been struck by the interest in marking this year’s anniversary.
[John Conconcannon] “It’s great to see a parish united in things and they have put in a great effort in getting these artefacts and they’ve a lot of material printed and a lot of information on our grandfathers.”