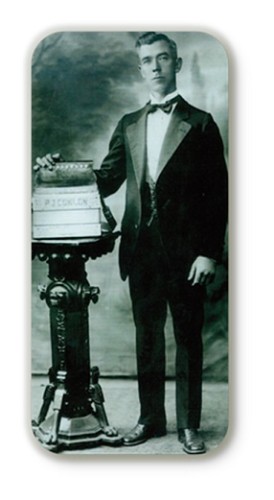 Regarded as an accordion player supreme, Pete Conlon was born in Gurrane, Milltown in 1892. Pete, or Peteen, as he was called at home, emmigrated to America while aged 20, arriving in Ellis Island on May 12th, 1912. The ship’s manifest shows him as having arrived on the liner Carmania from Liverpool.

He had gone to England in 1909 from where his sister Delia was married in Kilvine, Co. Mayo, to his brother Tommy (1879-1963) in Manchester. Peter was living and working in Hindley, England (a little west of Manchester) at the time of emmigrating to the US, and had been working as a railway hand. His brother Tommy had been in Manchester since the mid 1890s.

Pete was among the first musicians in the USA, or anywhere for that matter, to record traditional rural Irish dance music commercially. In all, he made 52 record sides between November 1917 and March 1929. The Wall Street financial upheaval of late 1929 put a stop to him, potentially, making more recordings thereafter.

In, circa, 1925, recognising his genius, an academy of music honoured him for his musical prowess. As part of this recognition he was awarded the newly introduced 8 voice Baldoni Bartoli single row accordion in his honour. This accordion, with its 8 set of reeds sounding for each note played, insured a strong sound which could be heard above the clattering of dancers in the dancehalls of New York where Peter plied his trade and before electronic sound amplification emerged. The accordion player Charlie Harris acknowledges being influenced by the music and style of Pete Conlon.

There was a double CD and booklet set involving 47 recordings, and an extensively researched booklet of Peter Conlon published in 2012.