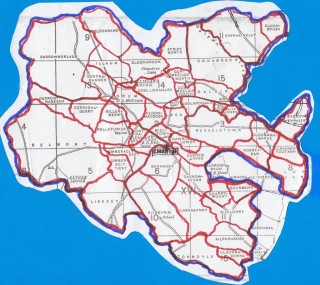 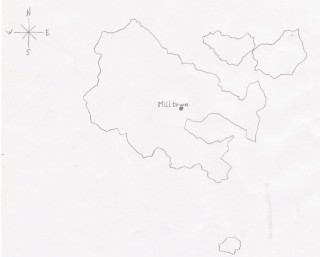 Map of joint old civil parishes of Addergoole and Liskeevy Co Galway. Please note that this map does not correspond to the current day map of Milltown parish as some townlands have since been subsumed by other neighbouring parishes.
Ray McGrath

Addergoole, from the Irish ‘Eadhair Ghuil’ meaning ‘Between the Streams’, or ‘Fork of the Two Streams’.

The old civil parishes of both Addergoole and Liskeevy are now jointly known as Milltown parish. With both parishes having ancient origins, as early, as 1306 Addergoole parish was listed as one of the parishes whose tithes supported the Archdiocese of Tuam. The original parish boundaries have changed somewhat, as outlying townlands have since been subsumed by other neighbouring parishes whilst some other neighbouring townlands have since become part of Milltown parish. Most of these changes occurred in the 1800’s. The correct name for the full modern day parish area is the parish of Milltown – Ballyglass.

Addergoole was not a townland of the parish but rather an area, bordering the townlands of Carrowntomush and Ardcloon in the east of the parish, towards Dunmore. The ruins of Addergoole church, which was reportedly located in the centre of the graveyard or towards the east of the graveyard there, were removed by Galway Co. Council in the 1960’s to facilitate rebuilding of the nearby Dalgin bridge.

The remains of Liskeevy church today lie in ruins, however a pathway through private farmland and adjacent to the river Clare (beside Liskeevy bridge) provides local access to Liskeevy graveyard.

Thus, the parish church is now St. Joseph’s church, Milltown, which is situated in the townland of Banagher, Milltown. It was constructed in 1969/70 on the site of the ‘old church’, which was itself, built in 1819 on a piece of land freely donated by the Bodkin family of Kilcloony, Milltown. St. Joseph’s Church, Milltown, was dedicated in August of 1970 by the late Dr. Joseph Cunnaune, Archbishop of Tuam.

The full parish area however, also includes St. Patrick’s church, Ballyglass, Co. Mayo, which is approximately 8 km distance westwards of Milltown. It was built in 1879 on the site of the original thatched church there. Having originally being part of Crossboyne civil parish and possessing its own cemetery nearby, in Carrownskehaun townland, St Patrick’s church, Ballyglass, continues to maintain it’s own identity as a half parish area church in catering for the spiritual needs of the general communities of Scardaune and Garrymore, Co. Mayo. It thereby covers the fringe townlands of the neighbouring parishes of Ballindine (Kilvine), Crossboyne, Kilconly, Roundfort) and Milltown – (Addergoole & Liskeevy) also.

Although the original parish names are derived from historical ecclesiastical settlements both at Addergoole, (in Carrowntomush townland approximately 5 km east of Milltown) and Liskeevy, (approximately 4 km south of Milltown), there is some suggestion also, of other churches having existed within the current parish area with townland names such as Kilerneen – (‘eirnin’s church’), Kilcloony – (‘church of the meadow’), Kilgevrin – (‘gevrin’s church’) and Kilphrasoga – (‘frasoge’s church’). Furthermore, ‘loch na h-altora’ – (‘lake of the altar’) which is the Irish name for Belmont lake, suggests that mass was celebrated there, most probably in penal times.

Aside from the main parish cemeteries located at Addergoole – (old graveyard and new cemetery), Kilcloony – (on the N17 road, approximately 2 km south of Milltown), Kilgevrin (beside Liskeevy) and Liskeevy graveyard – (which is not in current use), there are too, several ‘Children’s Burial Grounds’ dotted throughout the parish. St. Joseph’s Church grounds also contains a number of graves, most notably past serving priests and curates alongside some members of the kirwan/birmingham family of Dalgin estate, Milltown.

The parish of Milltown – Ballyglass is part of the Dunmore deanery of parishes within the Archdiocese of Tuam. A new diocesan parish cluster group comprises of the following parishes: Claremorris [incl. Barnacarroll] / Crossboyne [incl. Taugheen] / Kilvine [Ballindine & Irishtown] / Milltown – Ballyglass. The (assigned active ministry) priests of this cluster (currently 5 in 2012) work along side each of the individual parish pastoral councils in the administration of each of the parishes. Collectively, resources are shared.

The current parish priest is Fr. JJ Cribbin, a native of Ballyhaunis, Co. Mayo. Down through the years the parish of Milltown – Ballyglass has provided notably high numbers of priests and religious who have served in dioceses both in Ireland and throughout the world.

Note: church catchment areas in brackets (…-…) have an association with part or all, of the townland listed opposite.
Note also: Ardcloon, Quinaltagh and Shanballymore townlands are not part of the present day parish of Milltown – Ballyglass.

Note: Church catchment areas in brackets (…-…) have an association with part or all, of the townland listed opposite.
Note also: Ardacong townland is not part of the present day parish of Milltown – Ballyglass.

Townlands within the Milltown community, that once formed part of other ‘civil parishes’ are:

Note: The townlands, (in brackets) in this list have since become part of the parish of Milltown – Ballyglass, the other townlands have remained as part of their present day respective parishes.

Note also: Ballyglass as mentioned, a half parish area conjoined with the parishes of Addergoole and Liskeevy (Milltown) since the late 1800’s. Its catchment area includes part or all of the following townlands:

Parish Curates of Milltown – Ballyglass (since 1962):

Please note: The author of this document wishes to state that, whilst taking every effort to ensure that all of the information given is correct, he takes no responsibility for any errors or omissions. Compiled: 2012.