Coping with the Epidemic 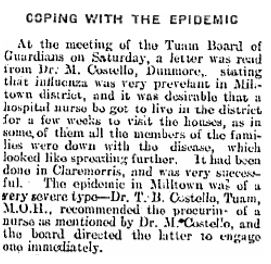 At the meeting of the Tuam Board of Guardians on Saturday, a letter was read from Dr. M. Costello, Dunmore, stating that influenza was very prevalent in Milltown district, and it was desirable that a hospital nurse be got to live in the district for a weeks to visit the houses, as in some of them all the members of the families were down with the disease, which looked like spreading further. It had been done in Claremorris, and was very successful. The epidemic in Milltown was of a very severe type – Dr. T.B Costello, Tuam, M.O.H., recommended the procuring of a nurse as mentioned by Dr. M Costello and the board directed the latter to engage one immediately.