You are here: Home>Topics>Newspaper articles>The proof of true love is in the pudding

The proof of true love is in the pudding

Catriona and Brian Flaherty run an award-winning dessert company – a late career change for both. 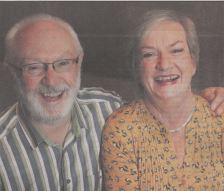 Her intelligence was one of the things that first attracted Brian to Catriona when they were 20-year-old students in 1973. She was doing a degree in medical laboratory science at DIT on Kevin Street, and he was doing veterinary science at UCD, where her sister Marie was also studying. They were part of a group of student friends who hung out, and the first time the Galway man and Dublin girl met was while they were carol singing for charity in Dunnnes Stores in Cornelscourt. “Catriona was friendly, good fun and intelligent and she looked well and had a great smile,” says Brian. “She had a good sense of humour, which stood to her as time went on.”

Catriona jokes that she needed it, putting up with him, as Brian has a dry wit and a rather mischievous manner, and he’s great fun. Catriona remembers him having a beard and a big mop of dark curly hair when they first met. He had a motorbike and they went on holidays on it. They started dating almost a year after they met, and did their final exams a mere week before they got married in 1976. After stints in other counties for Brian’s job they settled in Kilmessan, Meath, and had four children, who are now adults. Aine is married to Colm and is mum to their three grandchildren, Clodagh (7), Eoin (5) and Sadhbh (3). Rory is married to Anna and is a surveyor who works part-time in the business and contributes greatly to it. Cathal is in Australia with his girlfriend Gemma, and Cormac is in England. They’re a very close bunch and have great fun when they all get together. Catriona did some farming when the children were small, and loved working with ewes and lambs. It was a huge change for her, being a city girl, but Brian was experienced as he had grown up on a farm himself in Milltown, Galway, where he was the eldest of Kathleeen, now 94, and the late Michael’s four children. He worked as a vet for many years and then joined the Department of Agriculture until he retired.

The idea for the desserts business came about because Catriona grew up in a house in Ranelagh where there was always ‘something nice’ for visitors and friends who called. Her big question on arriving home from school every day was always, “What’s for pudding?” She came second of the late Molly and Eddie O’Dea’s six children, and in the years before her mum died, Catriona used to stay with her a couple of nights per week. While there, she would always look in local shops for something nice for dessert, or pudding, as her mum called it, as she was from Belfast.

Inspired by this, she decided to try starting a dessert business herself in 2013, and availed of a Leader start-up grant from Meath County Council. Naturally she named the company, “What’s for Pudding,” and began making desserts in a shared kitchen and supplying them locally. Sheridan’s Cheesemongers were a great help in bringing the fledgling brand around the country via their fairs, and two of the products won Blas awards (The Irish Food Awards) in 2014. Even though she knew her products were good and high-quality, Catriona was astounded to get a call from Dunnes Stores, who were interested in adding the products to their Simply Better range.

Having decided to go for it, Catriona and Brian worked closely with the team, at Dunnes Stores, with whom they say have been amazingly supportive and helpful. The couple opened their own kitchen on their premises in Meath to fill the orders. Brian, who has a master’s in food science, has now joined the business full-time and Catriona says his input is invaluable. They have been supplying three Simply Better desserts over the past two years, and there was great excitement last year when the simply Better Irish Handmade All Butter Sticky Toffee Pudding won The Great Taste Golden Fork award in London for the best food or drink product in Ireland. The other two Simply Better desserts are chocolate and lemon curd deserts, and they also produce three desserts under their own brand, What’s for pudding, and these are rich chocolate, sticky toffee and ginger and Seville orange.

While they are delighted at how the business is going, Catriona and Brian say that their own relationship is coping well with the added dimension of starting a new business in their 60’s. Outside of work, they enjoy time with the grandchildren, going for walks together and reading, and say they genuinely enjoy each other’s company even though they have very different personalities and ways of operating. “Brian is very pragmatic, practical and kind and he’s tough when he has to be,” says Catriona. “What drives him mad is that I lose my glasses all the time, and for me, it’s that when he wants something, he’ll ask the same question 20 times until he gets the answer he wants.  We have a very equal and fair relationship we’re well able for each other.  Sure, you’d have to be!”

Article published in the Sunday Independent on January 7th 2018