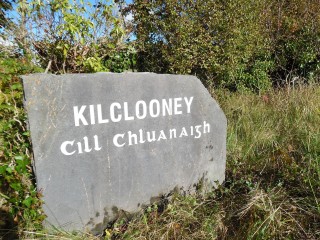 Cill Chluanaigh, Church of the lawn or meadow

O’Donovan’s Field Names 1838 provides various spellings of this townland: Kilcloony, Cill a Chlunaigh, Kylclownly & Kilclony, Kilcloony West, Killclooney and ‘Killcloony’. According to this source, Kilcloony was the property of John Bodkin, Esq, Quarrymount. It contains 302 ½ acres including approximately 65 acres of bog and 30 acres of rough pasture, approximately 17 acres of plantation or woody land.

Mary McGrath – Application Number C16 863: Mary McGrath applied for the pension on the 31st January 1916. At the time of the application her address was Ms Mary Corless, Dalgin, Milltown, Tuam, Co Galway. According to Mary, her parents were John and Margaret McGrath (nee Mannion).

Michael McHugh – Application Number C20 5832: Michael McHugh applied for the pension on the 11th May 1920. At the time of the application, his address was The Secy, Ministry of Health, Whitehall, SW1. According to Michael, his parents were John and Mary McHugh (nee Flynn).


There were 2 households in Kilcloony in 1901 where 14 people lived, 7 of whom were male and 7 of whom were female. All occupants were born in County Galway and were Roman Catholic. The heads of households were Michl [sic] O’Keane and Patt Murray. The 2 families spoke Irish and English except 2 year old Molly O’Keane; she spoke English only. The houses were listed as private dwellings. The walls on both houses were made of stone, brick or concrete. The O’Keane’s roof was made of perishable material while the house in which Patrick Murray lived was made of permanent material. The census forms were collected on the 6th April 1901.

Michl O’Keane worked as a farmer. He was 50 years old. He was married to Celia who was 30 years old. They lived with their 4 children: James was 8 years old, Maggy was 5 years old, Ellie was 3 years old and Molly was 2 years old. Patt O’Keane, an unmarried 40 year man, brother of head of household was also in the house. The 4 eldest members of the household could read and write. The O’Keane family lived in a 2nd class house with 4 front windows and 7 people occupied 3 rooms. Michael O’Keane owned the land on which his house was situated along with 1 stable, 1 cow house, 1 piggery and 1 barn.

Patt Murray, aged 50 worked as a herd. He was married to Mary who was 46 years old. Patt and Mary were unable to read. They lived with their 5 children: Kate was 20 years old, Michael was 19 years old, Patt was 18 years old, Mary was 15 years old and William was 13 years old. All of the children could read and write except Michael; he could read. The 4 older children are listed as being unmarried. The Murray family lived in a 2nd class house with 4 front windows and 8 people occupied 3 rooms. The Irish Land Commission owned the land on which the house was situated along with 1 stable, 1 cow house, 1 piggery and 1 barn.


The census forms which were collected on the 8th April 1911 showed that there were 2 households in Kilcloony in 1911. There were 2 heads of households: Patrick Murray and Celia Keane. There were 17 residents, 9 were male and 8 were female. All individuals were Roman Catholic and were born in County Galway. Both houses were built as private dwellings. The Murray house was listed as having walls and roof made of permanent material. The Keane house was listed as having walls of permanent material and roof of perishable material.

Celia Keane, a widow was 40 years old. She worked as a farmer. She lived with her 7 children: James who recorded his occupation as a farmer’s son was 18 years old, Margaret was 16 year old, Ellen was 14 years old, Mary was 12 years old, Bridget was 10 years old, John was 6 years old and Thomas was 5 years old. Ellen, Mary, Bridget and John were scholars. All of the household could read and write except for the 2 youngest sons. All members of the household spoke Irish and English except for the 3 youngest children. The Keane family lived in a 2nd class house with 3 front windows and 6 people occupied 3 rooms. Celia Keane owned the land on which her house was situated along with 1 stable, 1 cow house, 1 calf house, 1 dairy, 1 piggery, 1 fowl house, 1 barn and 1 cart house.