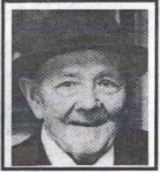 First Girlfriend: Can’t remember. I had a good few of them in my time

Earliest memory: I remember when I was about ten years old going to Dalgin School. We wore no shoes then from April 1st until November. Frank Dolan’s father William taught us and there were 98 boys in our school then and an equal number in the girl’s school.

First Job: My first job was in Kirwan’s, Dalgin at the age of 15, haymaking and doing the turf. We got a shilling a day

First Dance: I’d say it was outside Garvey’s House. There was a crossroads dance there every Sunday evening. They would start early and be over at around 11pm. We called it Hurling.

Price of Pint when you were young: Two Pence for a pint and the same for ½ one and 3 pence for 1 oz tobacco.

Difference in social life then and now: There were no pubs open Sunday or Sunday night. If you travelled 3 miles outside your area you could buy a drink in a public house.

Most Treasured Memory: When I was around 20 years old that was my happiest time – going to the dances in Milltown School. It was four pence to get in. There were big crowds then. We’d all walk. There were no bikes then. I was about thirty years old before they came out.

Biggest change you have seen over the years: I’d say television and videos especially seeing myself on the screen.

First motor car: The first motor car I saw belonged to the Lewins of Castlegrove and it came to Kirwan’s of Dalgin. I was about fifteen then.

Earliest historical memory: I remember when we had no Government here in Ireland and the English Police were in the Barracks in Milltown. There were six of them and you’d meet them all hours of the night walking. Then the Irish Guards came. One of the first, Eddie Callaghan was a very good friend mine.

What do you attribute your long life to: Plenty of hard work and good plain food and of course the good care from my family.

Any regrets: None whatsoever. I’d do it all over again. I enjoyed my life-every day of it.

Thomas will be 102 years old this year. He has six children, thirty five grandchildren and fifteen great-grandchildren.