Published in the Milltown Newsletter September 1995 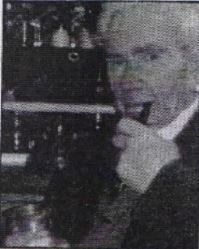 This issue of the newsletter, we feature Mr. William Costello, from Belmont Milltown. Willie lives with his wife Tess and daughter Anne in Belmont.

Favourite Pastimes: In my younger days I enjoyed taking part in plays during lent and advent. My favourite play was Bands and Plans and a favourite actor at the time was a local man Mattie Mullen. Now, I like to read the daily paper, smoking the pipe and enjoy making and receiving phone calls.

Person you most admire: Albert Reynolds and John Hume.

Favourite Sport: Boxing (I was good at it during my younger days).

First Job: In 1937 I served my time as a grocery assistant at Cahills, Tuam and not one penny did I get paid.

Favourite Singer: That fella that is always sweating – Christy Moore. I also like Brendan Shine singing Do You Want Your Lobby Washed Down.

First Dance: In a hay barn over at Cosgroves. We also went to tailor Rattigans where we had to pay 3 pence to go in.

Favourite Local Band: I was a roadie for this band. It consisted of Kieran Ansboro, Pake Connolly, P.J. Moran, Paddy Varley (R.I.P.) and Al Hynes. Al Hynes played the trombone – some fella said isn’t he awful then – sure I said no wonder when he is pushing that thing up and down his throat. Jim Comer from Dunmore was Taxi man. We were a famous six together and got in to many a scrap – mainly over WOMEN.

Favourite Quotations: Don’t be “codding” yourself – (Do you think you are smart)?

Happiest moment: The day I bought my first new van and of course that day I got married.

Biggest change you have seen over the years: No young lad wants to do any work without machinery – Goodbye Spade.

If you won the lotto: I wouldn’t tell anyone I would go around t the pubs slip the odd tenner into a poor fellas pocket, and tell him to say his prayers and if he prayed hard enough, his prayers would be answered, and he might find a tenner in his pocket.

Motto: A wrong doing can never be hidden.

What is it like to be in the Hot Seat: It’s like being in court, but according to the Newsletter Committee – you get a couple of pints, which you don’t get in court.