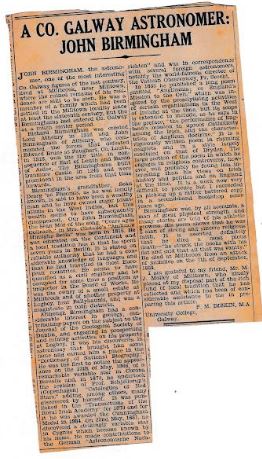 JOHN BIRMINGHAM, the astronomer, one of the most interesting Co. Galway figures that the last century, lived at Millbrook, near Milltown, where the ruined remains of his residence are still be be seen. He was a member of a family which had been settled in the Milltown locality since at least the sixteenth century, but the Birminghams had entered Co. Galway at a much earlier period.

Richard Birmingham was created Lord Athenry in 1316 and John Birmingham of Athenry who commanded the forces that defeated Edward Bruce at Faughart, Co. Louth, in 1318, won the title in consequence of Earl of Louth and Baron of Ardee. The Birminghams built Dunmore Castle in the area from that time forwards.

Birmingham’s grandfather, Sean Dearg ‘ac Fheorais, as he was locally known, is said to have been a wealthy man and to have owned sugar plantations in the west Indies, but this disappeared. Our John Birmingham, the Sean Mor of the song, “Cearc agus Coileach,” in Mrs. Costello’s “Amhrain Mhuighe Seola” was born in 1816. He was educated on the Continent and a local tradition has it that he spent seven years in Berlin. it is stated on reliable authority that he had a considerable knowledge of languages and that he had travelled in most European countries. He seems to have qualified a civil engineer and he occupied for some time a position as inspector in the Board of Works. He was the owner of a small estate at Millbrook and of another property at Logboy, near Ballyhaunis, and was a magistrate in both districts.

Although Birmingham had a considerable interest in geology, contributing papers on the subject to the Journal of the Geological Society of Dublin, and engaging in prospecting and mining activities on his property at Logboy, it was his discoveries in astronomy that brought him some fame and earned him a place in the “Dictionary of National Biography.” He was the first to notice the appearance on the 12th May, 1866, of a remarkable variable star in Corona Borealis, and, in 1872, he undertook the revision of Prof. Schjellerup’s (Copenhagen) “Catalogues of Red Stars,” adding, among others, many discovered by himself. It was published in the “Transactions of the Royal Irish Academy” for 18979 and for it he was awarded the Cunningham Medal in 1884. On 22nd May, 1881, he discovered a strikingly variable star in Cygnus which became known by his name. He made contributions to the German “Astronomische Nachricten” and was in correspondence with several foreign astronomers, notably the world-famous director of the Vatican Observatory, Fr Secchi.

in 1863, he published a long poem entitled “Anglicania: or England’s Mission to the Celt,” which was inspired by the proselytising activities of certain organisations in the West of Ireland at the time, but its scope is extended to include, as he says in the preface, “the performance of England’s mission to uproot Catholicity among the Irish, and the characteristics of Anglican doctrine.” It is a couplets and in a style largely modelled on that of Dryden. The large section of the poem in which he ever will probably be found less interesting than his views on Irish history and politics and on England at the time. It is a work now very difficult to procure but I succeeded in picking up a rather battered copy in a second hand bookshop some years ago.

Birmingham was by all accounts a man of great physical strength and many stories are told of his athletic prowess. His poem shows that he was a man of strong and sincere religious faith. It is asserted definitely that he died a most pious death – “he struck the books with his fist and said that all was vanity.” He died at Millbrook from an attack of jaundice on the 7th of September, 1884.

I am grateful to my friend, Mr. M.J. Molloy of Milltown, who kindly placed at my disposal part of the rich fund of local tradition that he has collected and which has been of considerable assistance to me in preparing this article.

This article appeared in the Connacht Tribune on the 17th March 1956.