To the editor of the Galway Vindicator 1866 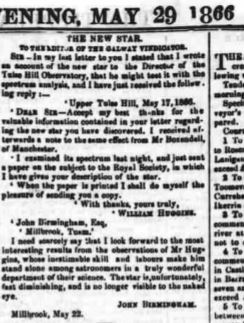 Sir –  In my last letter to you I stated that I wrote an account of the new star to the Director of the Tulse Hill Observatory, that he might test it with the spectrum analysis and I have just received the following reply : –

Dear Sir –  Accept my best thanks for the valuable information contained in your letter regarding the new star you have discovered. I received a note afterwards to the same effect from Mr Boxendell of Manchester.

I examined its spectrum last night and just sent a paper on the subject to the Royal Society, in which I have given your description of the star.

When the paper is printed I shall do myself the pleasure of sending you a copy.

With thanks, yours truly

I need scarcely say that I look forward to the most interesting results from the observations of Mr Huggins, whose inestimable skill and labours make him stand alone among astronomers in a truly wonderful department of their science. The star is, unfortunately, fast diminishing and is no longer visible to the naked eye.

It affords us much pleasure to find that Mr Birmingham was the first discoverer of the new star, which had escaped the notice of the professional astronomers.  To remark a strange visitor among the countless numbers of the heavenly host, and in no way distinguished from them in appearance, betrays a preciseness of knowledge and a keenness of observation that is highly creditable to one in Mr Birmingham’s position of a country gentleman. But it is not alone in astronomy that the gifted author of Anglicania is distinguished. In literary acquirements he is probably not surpassed in any living man, while as a linguist, a geologist and a mathematician he stands alone, at least in this country. He is indeed a man to be proud of, and truly we are proud of this Galwayman, who has mastered all the sciences, and who is more familiar with the celestial spheres than even most learned men are with a map of the world. We sincerely congratulate Mr Birmingham upon the honour he has achieved in having been the first to make this important discovery.

Transcription of Newspaper Article: The Tipperary Vindicator and Limerick Reporter Tuesday Evening May 29 1866 .