You are here: Home>Topics>The Tuam Herald>Floods won’t deter Santa from his annual visit to Milltown cottage

Annual event will go ahead 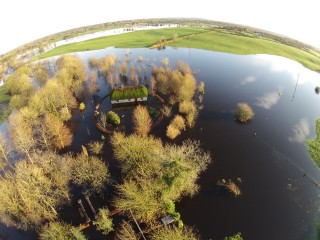 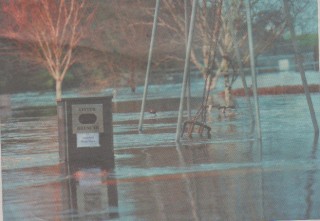 The playground in Milltown was underwater over the weekend.
Ray Ryan 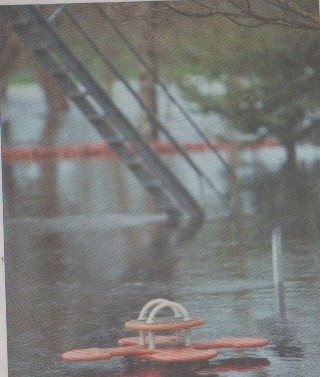 Floodwater may have dampened preparations for the visit of Santa to Milltown next weekend, but organisers say the annual event will go ahead.

The River Clare was one of several throughout the county to burst its banks during Storm Desmond, with large parts of the village left under several feet of water, including the playground and the historic cottage that plays host to Santa and his team of elves each year.

However, organisers are hoping that the weather improves over the coming week, the three day event can go ahead as planned.

Olive O’Sullivan told The Tuam Herald on Tuesday that a contingency plan was now in place, if any more rain fell between now and Friday, December 18 when Santa makes his first visit of three visits to Milltown.

“We can’t even get near the place at the moment but if the water does go down it will only take us a day or two to set up,” she said.

“If next week remains dry, and the river is at a safe level, then our volunteers are ready to move in and get the cottage ready. We have all the gifts and Santa is looking forward to his annual visit, so if the cottage isn’t an option, we will relocate to Milltown Community Centre.”

Santa’s Cottage is now in its 12th year in the village. With all proceeds raised from the event going to local charities.

This year’s beneficiary is Friends of Ollie, which supports local man Ollie Burke who was badly injured in a workplace accident in 2007.

Santa’s Cottage will be open on Friday, December 18 from 6pm to 8pm and again on Saturday and Sunday, December 19 and 20 from 4pm to 7pm. Admission costs €10 for children, while adults are free, and each child will receive a gift from Santa.

Article published in The Tuam Herald on Wednesday 9th December 2015