Gardaí seek information on culprits as damage is repaired 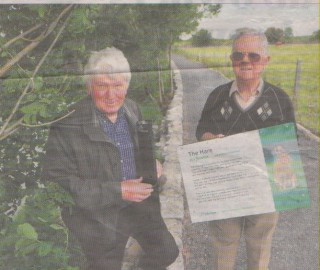 Tony Murphy and Frank Glynn replace a sign which was vandalised in Milltown.
Ray Ryan

The scourge of vandalism has been visited on Milltown’s award winning River Walk project but there is a determination in the community that this kind of activity will not be tolerated.

An information board was ripped from its post and young trees damaged. The Gardaí are investigating and anyone with information is asked to pass it on to them.

The vandalism is particularly disappointing because the walk has been entered into a special category in the Tidy Towns competition.

Frank Glynn told The Tuam Herald that the matter was taken very seriously because they didn’t want it to “catch on”.

“If you accept this sort of thing, before you know it those involved move on to something else and this public amenity would be destroyed. The Gardaí are looking into this and I understand they have a fair idea who is responsible. We want the message to go out loud and clear that we won’t tolerate this sort of behaviour and any repeat will be taken just as seriously,” he told The Herald.

Those involved in the River Walk project are particularly concerned at newly planted trees being targeted. They decided to invest in more mature young trees which gave them a 5-7 year start and more of a chance of surviving to provide a shaded walk in years to come.

Frank Glynn said they were costly but a great investment and Brennan Bros Landscaping, Claregalway native sons of Milltown, did a great job and put a huge amount of effort into the project for them.

“These trees are very popular with the walkers and we’ve received a lot of favourable comment. Now we have a situation where some clowns think it’s smart to damage them and deny other people the pleasure of enjoying them. I can tell you that anyone found responsible and we have a fair idea who it is, will be putting their hands in their pockets to replace the damaged trees. We’re determined to nip this carry on in the bud,” Frank said.

The walk is not only being enjoyed by local people but bus tours heading to Knock are stopping for picnics and people are travelling to enjoy a break by the river bank.

Just recently a 141b salmon was landed and improvements for anglers are in train.

Article published in The Tuam Herald on Wednesday July 1st 2015