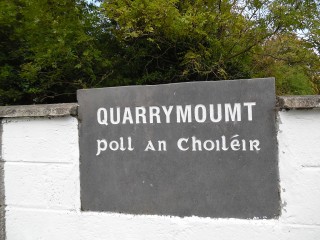 
The Down Survey Map 1641 (pre Cromwell) shows that owner of Quarrymount was Lord Birmingham (a protestant). The Down Survey map 1670 (post Cromwell) states that the owner was Lord Athenree (a catholic). 30 acres of unprofitable land, 31 acres of profitable land and 31 acres of forfeited land are specified. The name of the townland provided on the down survey map was Knocknehout.


O’Donovan Field Names Book 1838 states that Quarrymount was the property of Sir George Shea, Dunmore, County Galway. It contains 149 acres stature measure including about 12 acres of plantation or woody land. Kilcloony old church is also in this townland.

Quarrymount consisted of an area of 149 acres 2 roods 33 perches. There was a total population of 63 people, 33 were male and 30 were female who occupied 9 houses. By 1851, the population had decreased to 28 people, 13 were male and 15 were female. There were just 2 inhabited houses. The poor law valuation rate paid was £92.


The census forms were collected on the 18th April 1901. There was just 1 house with 9 inhabitants (5 were male and 4 were female) in Quarrymount in 1901 where the Guinan family resided. All occupants were Roman Catholics.

Patrick Guinan was 56 years old. His occupation was listed as a pensioner R.I.C. He was born in Kings County. Patrick was married to Mary who was 48 years old. Mary was born in Tipperary and did not have any occupation listed. Patrick and Mary lived with their 7 unmarried children. Mary Esther was 24 years old. Mathew was 23 years old and worked as a shop assistant. John was 18 years old and Patrick was 16 years old. Neither John nor Patrick had any occupation listed for them. Delia was 10 years old and Rose E [sic] was 9 years old. Delia and Rose E were scholars. Thomas was 3 years old and he was born in County Galway. The family could all read and write except for the youngest child Thomas; naturally he could not read. The 6 eldest children were born in County Mayo. The Guinan family lived in a 1st class house with 10 front windows. Their house had 14 rooms. The house was built as a private dwelling. The house roof and house walls were made of permanent material. The Irish Land Commission owned the land on which the house was situated along with 3 stables, 2 coach houses, 1 harness room, 1 cow house, 1 piggery and 2 barns.


There were 2 households in Quarrymount in 1911. There were 9 inhabitants. There were 4 males and 5 females. They were all Roman Catholics. The census forms were collected on 11th April 1911. The 2 houses were built as private dwellings. The roof on each house was made of slate, iron or tiles. The house walls were made of stone, brick or concrete.

Ellen Mannion was a 40 years old widow. There was no occupation listed for her. She was born in County Galway. She could read and write. She also spoke Irish and English. Ellen lived in a 2nd class house with 2 front windows and her house had 4 rooms. James G Gordon owned the land on which the house was situated. There were no farm buildings listed in relation to this house.

James G Gordon was a 56 year old widower. His occupation was listed as JP [sic] and farmer. He was the only member of the household that spoke Irish and English. He lived with his 5 children. William J [sic] was 20 years old. Frank J [sic] was 19 years old. Ethel Mary was 22 years old. Mabel J [sic] was 18 years old. Josephine M [sic] was a 12 year old scholar. The Gordon family were all born in County Roscommon. Two servants were recorded on the census form. Mary Malone who worked as a domestic servant was 25 years old. She was born in County Meath. John May was 20 years old. He worked as a farm servant and was born in County Dublin. The two servants were both single. The entire household could read and write. The house was a 1st class house with an impressive 12 front windows and the house had 15 rooms. Within 10 years, there was an additional 16 farmsteads and out-offices built on this land. James G Gordon owned the land on which his house was situated along with 26 out-offices and farm buildings consisting of 12 stables, 2 coach houses, 1 harness room, 1 cow house, 1 calf house, 1 dairy, 1 piggery, 1 fowl house, 1 boiling house, 1 barn, 1 turf house, 1 potato house, 1 store and 1 laundry.