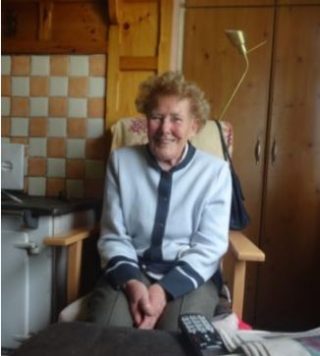 As Celia turns 90 this year, she discusses how she came to be in Milltown, goes back in time to her school days and remembers various events throughout the years.

Well I’ll tell you now, this is my Aunt’s home, there in that small thatched house, we had to knock it sure and they were selling the farm and my Aunt was dead so they sold that piece and they went down to Roscommon and my husband bought it, the lord have mercy on him so that’s how Celia happened to be here. I turned around and married a man that bought the land.

We used to be coming home from school and this woman used to be out on our way. She had haws. They were the fine big haws and the creature used to go out with the twig knocking them down. She said “They’re the happiest days of your life”. We couldn’t say they were because we hated school………We got on…… Do you know the break at school? We used to go down the bridge and a crowd of us used to pull the clothes up to here and walk up the river at the lunchtime and come down then, that’s how we used to spend the time.

The coming of electricity

The electricity, they hadn’t it here now when I came, well other people had it but the ones in the thatched house, that’s my Aunt, she hadn’t it but when we came in then, we got it and Thank God we have it since. Oh it was mighty, mighty, Well, I wasn’t in that house until the electricity. When I came in, the electricity just came on.

Oh Stop, sure they was nothing that time only Bacon and Cabbage for the dinner everyday, we’d come home from school, twas bacon and cabbage………….On Sunday then, we’d have a bit of a roast…….You might have a turkey now for the occasion…..a goose or a duck.

I reared 7 of them in a thatched house – 2 bedrooms and then when I moved in here to the new house, I got another baby. So I had 4 boys and 4 girls…………….The open fire I used to cook. I used to make the cake in the oven and put the coals over it and have them under it and bake the cake…..I used to wash the spuds and have the cabbage. Twasn’t steak or anything then that time. Not, we couldn’t afford it. Anyway nobody had it, I think at that time……….About the bread, make it out of your head……….we used to make them, put the flour, the brown flour and bread soda, milk, make it up, put it in the tin, put it in the oven.

Washing clothes and everything back to the well……………. So twas tough work now and then, wheel the pram with me and I used to cycle up feeding cattle or sheep, bring a bucket of water….No trousers, the skirt above here on me.…………. Oh, stop, my heart, my husband’s heart wasn’t bad but I used to do it to save himself – sparing my husband………. Oh, I done my bit.

[My husband] did [farm]…………..the cow and the calf, sheep, the little lambs. We had the sow and the banibhs……………………………Fairs that time…….one in Tuam, we used to go to Ballindine…………………I remember before I got married, my Dad, we walked it from Dillonbrook where I lived all the way back and into Ballindine but driving sheep. Sure when we got there, the fair wasn’t started and we had to wait. Around half 10 or 11 o’clock, I thought it was evening, the length. I said to Daddy would we soon be home. Oh, we didn’t start at all yet, he said. Oh stop it…………..My Dad lived to be a 102. He used to cut turf and used to go ploughing in Springtime. He had 2 horses and he used to go out ploughing for people and then he started cutting turf and we used to have to spread it. He used to sell 30 cribs here to the priests and 30 to Sheridans and down to Kirwins in Dalgin and our own.

I went with Dad doing the work, they used to have the turf and the harvest. We worked like a man as they used say…………..But we were happy.

The stations are dying out now……….We’d have the mass and then we’d have tea and things after it…………We used to have to prepare…….That time, it was lime and whitewash. We were down in the old house that time………having the Blessed Sacrament coming into the house…….There was no such thing [as special food] but the sandwiches that time and a cup of tea and sandwiches – ham