The life that was 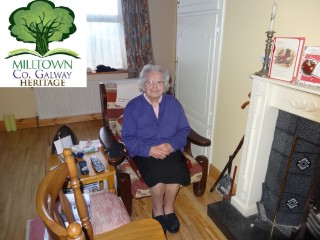 Attracta Farragher in her home in Russelstown. December 2015
Photo by Pauline Connolly

Attracta Farragher sits back and tells us about her early life.

I was born in Carrownurlaur, Ballindine, County Galway. My father was Thomas Rhatigan and my mother was Ann Donnelly and they had a farm. My father bought this farm after coming from America and that’s where we lived and we helped on the farm.

We had hens and ducks and geese. We didn’t do much turkeys. We had too much we thought. But we had geese, we’d have a flock of geese and we’d have a goose every Christmas and that was a novelty them times because you wouldn’t have it every day of the week if you wanted but we hadn’t it, we thought it was only the elite that had the turkeys for Christmas.

Work continued after the school day

After coming home from school, we’d have to go out weeding and maybe go to the bog and foot the turf, that kind of thing. We were kept busy, I can tell you.

When we were going to school in Ballindine, every household had to bring a cart of turf in the winter time to keep the fire going and sometimes it wasn’t very good turf, no more than my own and oh you froze from the cold sometimes.

I remember getting a slap for one thing we did wrong at school and they made out it was my fault that I was the leader and I remember there was a little mark there on my hand where she gave me a slap with a big aul pencil, twas about that length – as thick as three pencils together. I’m telling you, you felt it when you got a wipe of that.

Well, this woman that was teaching us, she used to go to Dublin at the weekend. I don’t know what the attraction was up there for her but she was gone anyway and she told us to write down how you make a cake and when we put the cross on the top of it then, I had it spelt wrong and of course, they all copied mine because they thought I was right and it was me that suffered for it, not them (laughs), oh lord. I bake a cake once a week there for myself. I can’t stand loaf, the only way I eat loaf is toast it.

Working life in the bacon factory

I worked in the bacon factory in Claremorris – making sausages and getting the meat ready for them and linking them up and if you didn’t do them right, twas god help ya. You might get bits of meat at a reduced price, never anything for nothing. You had to work for everything.

15 shillings a week, the old money, oh that wasn’t much, but I suppose it meant a lot in them times. We survived anyway.

My brother had a shop in Ballindine and I used to be there fair days or sometimes helping out in the bar, that’s all…..Whiskey, beer, stout, glasses of stout, there were barrels of stout there, tapping it and filling them out till they’d be satisfied.

When we came to the war, everything was rationed, you had to have to have your coupons for this, that and the other and we were only allowed half ounce of tea per person in the week, three loaves of bread in the week and you might be lucky to get a pot of jam once in a while. I don’t know about butter or things because we always had our own butter and vegetables and potatoes and all that kind of thing.

You could get everything before the war, you could get flour, tea and sugar, any amount you wanted but then the coupons came out and you had to get that, even petrol and oil and all that, paraffin oil we used in the lamps them times, all that was rationed.

We were delighted because gradually everything was coming back to normal again and sure the prices, you’d get five woodbines that time for two pence half penny and a package of players or Aftons for six pence. So, it’s no wonder people got into smoking, now they cannot stop and they are way dearer.

They used to have races there every Easter Monday, great crowds, they’d have stalls out, in the field then, behind the post office, and apples & oranges, bananas, sweets of all kinds, we used to enjoy it.

We had this goose that we reared ourselves for Christmas day. We had an open fire in my house and we had this big pot, the old fashioned pots with the 3 legs under it and you’d have it out in the hearth, coals under it and coals over the lid to cook the turkey or the goose and you’d cook vegetables separate and when you take up the goose, the goose is stewed, you’d turn the vegetables into the gravy that came off the goose and god, they used to be delicious. God I’d love to see them back again (laughs). And we’d have jelly and custard after that. Of course, the currant cake was a novelty that time because you wouldn’t have it only at Christmas time. Sure, we can have it every day now.