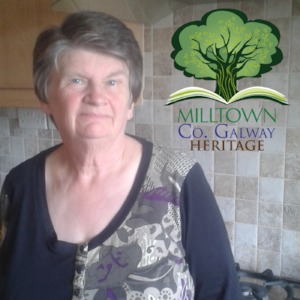 Bridie Connolly tells us what life was like before piped water was introduced and how families coped. She speaks about the types of food families ate and how they cooked. She reminisces the life her father had as a beekeeper.

Life before piped water, I can tell you, there was plenty of hard labour. The drinking water for the tea and for the cooking was taken from a spring well in your land / maybe in the neighbour’s land and that had to be walked to the well, carried home in a bucket a few times a day maybe. The water was collected from the roof quite a bit in barrels and tanks and when that went dry for livestock, you might have to get the ass cart and go to a waterway and teem the water in with a bucket into the barrel and that’d be transported home with the ass and the ass cart, the donkey, god bless the little donkey, but they were great, all the work they did in their time. That water then, when it was brought into the barrel, it was used for the livestock, had to be taken out in a bucket and put into a tub a few times a day for them to have sufficient water, so that was very hard work, the piped water has got rid of all that now. Cattle out on the land now have got drinking troughs so they are gone modern now like the people.

Cooking was generally done on the open fire. It was a good while after before people got electric cookers and that kind of thing. There was a big huge open fire in most houses and on that fire, there was a few pots and there was a big iron thing, a crane that swung in and out over the fire and the crane. There were pots with pot hooks that was to hang the pot on the crane. Potatoes were cooked on the fire. Cabbage and bacon and turnips were cooked very, very often on the fire as well. Bread was baked on the open fire. There was a pot oven, 3 legs on it and that could have been left beside the fire and there would coals put on the top and coals underneath to bake the bread. Herrings were grilled on a tongs, the tongs that would put coals on the fire with and toast was made on a fork, slice of loaf, hold in front of a well kindled fire, mind you it needed to be well kindled and when one side was cooked, you stuck the fork in the other side and turned it round and did the other side.

Porridge, it was commonly known then as stirabout. Stirabout was cooked in a saucepan as well beside the fire with what they used to call flake meal so the diet was plain enough in those days but vegetables and those were all home grown and people had their own supply and their own garden and everything in it.

My father was a beekeeper and we had 3 beehives as well so I was fairly familiar with bees and their antics growing up. He used to have his own supply of honey that he sold. It was known that time and I still believe is to be good for asthmatics so he used to sell a certain amount of honey but I’ll tell you there was plenty of fun, if you’d call it fun the day the bees swarmed. We weren’t supposed to let them go. There was a certain technique in capturing those swarms. They generally went up and sat on a tree but if it was a dark day of raining, inclined to be raining, the bees didn’t go but if there was bright sunlight which there often was that time ago, the bees would take off but if you went out and got a twig, a twig was a brush, well a brush I suppose, you’d call it for sweeping the floor so you could put that in a bucket of water and dash of water at them and the bees would think it would rain and they would wait and then you had to get a canvas bag and a butter box……….A butter box was a timber box for holding butter and if you turned that upside down and put it up the tree and put a bit of honey inside on the bottom of it….but it’d be upside down or melted sugar….the bees would go in so then there was a certain skill of removing this box as well so then you have to be careful, put in on the ground with a bag underneath and a little stick underneath that and then someone might come to buy the bees if they wanted to get into bees. You had to pull out the stick very carefully and wrap the thing, the bag around the box and they in turn would be put into the hive and they would start up their beekeeping.