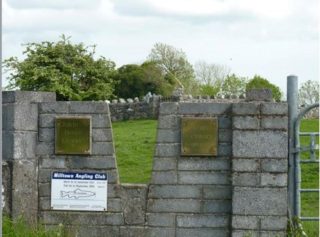 From Russelstown Bridge, you will see a walled children’s burial ground on a slight rise.  Children’s burial grounds or Cillíní were used for the burial of unbaptised children, suicide victims and strangers of unknown religion from at least the 18th century up to the early 20th century, as their burial was prohibited on consecrated ground by the catholic church.  Eleven known recorded Cillini are found in the hinterland of Milltown.