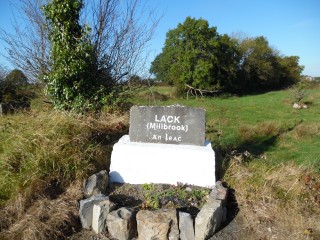 Air a Leic, a flagstone/slab or flat stone or rock


Lack is situated in the North central part of the parish of Addergoole, Barony of Dunmore, in Co Galway. Bounded on the north by Coolecknaleagh, on the west by Cloonacrusha, on the south by Dawros Lower and on the east by Cooladooaun and Russelstown.

The Poor Law Valuation of the townland of Lack was £100, 0 shillings and 0d (pence).

According to Griffith’s Valuation 1855, Lack was owned by John Bermingham, the total area being 177 acres 0 roods and 28 perches.

Of the 177 acres, 0 roods and 28 perches, John Bermingham kept 173 acres 0 roods and 14 perches for house, offices and land, Miller’s house and offices, flour, tuck-mill and kilns. He paid a total annual valuation rate of £122.

The Total Annual Valuation of Rateable Property in Lack was £125 19 shillings and 0d (pence).


There are 2 households listed in the townland of Lack in 1901. There was one person listed living in Lack in 1901. The 2 houses were built and listed as private dwellings. Both houses were built from permanent materials, i.e. Brick, stone or concrete. One of the roofs was built from perishable material, i.e. thatch or wood. The other house had a permanent roof, i.e slate, iron or tile. The 1901 census forms were collected on 4th April 1901.

Bridget Lyons, was 61 years old in 1901. Bridget gave her occupation as a farmer’s wife. She was listed as a widow. Bridget was born in Co Roscommon, she spoke Irish and English but was unable to read. Bridget was Roman Catholic. Bridget lived in a 3rd class house with 2 front windows and 2 rooms. Bridget Lyons was listed as the owner of the land on which the house was situated.

The only other house in Lack, contained no inhabitants. It was a 1st class house with 5 front windows, (no number rooms specified). In the B.1 House and Building Return from, Denis Kirwan was listed as the owner of the house and land on which it was situated along with 1 out-office or farm steading. (Form B.2 – missing)

There was no record of inhabitants living in Lack in 1911.