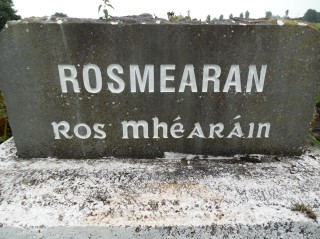 
There are various spellings specified in O’Donovan’s Field Names Book 1838: Rois Mheuram, Rossmearin, Rossferin, Rossmerin and Rossmearan. According to this source, Rosmearan was the property of Morris Golden, County of Mayo and contained 170¼ acres statute measure including about 65 acres of bog.


Richard Golding owned herd’s house, offices and land that comprised of 169 acres 3 roods 12 perches. He paid an annual rent of £64 for this area.


The census which was collected on the 13th April 1901 showed that there was just 1 household at this time. This house was a private dwelling occupied by the Coen family.

Patt Coen (50) worked as a shepherd. He was married to Ellen (40) who listed her occupation as a shepherd’s wife. They lived with 5 sons and 3 daughters. Pat (14), Thomas (11), John (8) and Mark (3) listed their occupations as shepherd’s sons. Maggie (15) and Mary (10) were scholars. Delia was 6 years old and Kate was 4 years old. All members of the Coen family were born in County Galway. Patt, Ellen, Pat, Thomas, Maggie and Mary spoke Irish and English. There was no language listed for the rest of the household. The Coen family lived in a 2nd class house with 6 front windows. 10 people occupied 4 rooms. Patrick Coen owned the land on which his house was situated along with 1 stable, 2 cow houses and 1 barn.


The 1911 census was collected on the 14th April 1911. The Coen family occupied their private dwelling.

Patrick Coen (66) worked as a farmer. He lived with his wife Ellen (55). At the time of the 1911 census, they were married for 30 years, had 9 children, 8 of whom were still alive in 1911. They lived with their 4 single children. Patrick (23) and John (19) listed their occupations as farmer’s sons. Delia (17) had no occupation listed for her. Mark (13) was a scholar. All of the Coen family were born in County Galway. They spoke Irish and English. They lived in a 2nd class house with 3 front windows and their house had 6 rooms. Patrick Coen owned the land on which his house was situated along with 1 stable, 1 cow house, 1 piggery, 1 fowl house, 1 barn and 1 cart house.