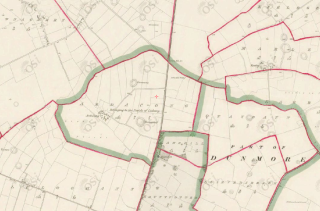 There are 3 monuments in Ardacong, 1 Souterrain and 2 Ringforts (one rath, one unclassified).

GA029-010001– The Souterrain is situated within the south half of a ringfort (GA029-010—- listed below). It is fairly well preserved, built of dry-stone. It consists of 2 chambers connected by a creep (hallway). The present access is via a displaced roof lintel in 1st chamber (length 12m, width 1.7m) which runs east-west. The East half has been robbed out. The creep (length 4m, width 0.9m) near the southwest end will lead to a 2nd chamber, (length 8m) which runs northwest-southeast. [1]

GA029-010—-  The first ringfort is unclassified. A roughly circular or oval area surrounded by an earthen bank with an external fosse (Ringfort – rath) or a stone wall (Ringfort – cashel). The term Ringfort – unclassified is used in instances where the surviving remains are insufficient to determine whether the monument was originally a rath or cashel. They functioned as residences and/or farmsteads and broadly date from 500 to 1000 AD.[2]

GA029-012—-  The second ringfort is described by Archaeological Survey of Ireland as being in tillage overlooking marshy land to the southwest. Marked on Ordinance Survey (OS) 6-inch maps as an oval enclosure (north-south c. 75m, east-west c. 50m). No visible surface trace survives. Probably a bivallate ringfort (Possessing two ditches (perhaps for defence), e.g. surrounding a hillfort) as Costello (1903 2-3) noted the existence if ‘two mounds and an intervening ditch’. The inner face of the inner bank contained ‘several large stones still remaining and it was probably when perfect, faced with these boulders’ (ibid). [3]