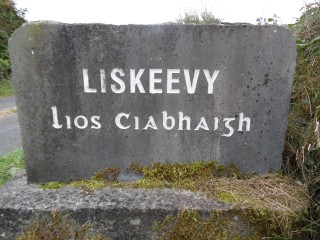 A church is situated on a low hillock in undulating grassland close the west bank of the River Clare. A railway line runs just outside its east boundary. It was marked on the 1st edition of the OS 6-inch map as a roofed rectangular building. A section of the north wall is the only ruins that survived. No architectural features are visible.[1]

A ringfort is situated on a rise in level grassland. It is in fair condition, defined by a bank. A field wall runs just outside the bank. Within the interior are a mass rock and a rectangular recumbent slab.[2]

A second ringfort is described as a poorly preserved circular rath defined by a denuded bank.[3]

A children’s burial ground is situated within a ringfort. No visible surface trace survives apart from 3 stones protruding above ground level, which may possibly have been grave-makers. A mass rock occupies the centre of the rath; roughly rectangular in ground plan, it was rediscovered while draining the nearby Lough Altore (Belmont).[4]

A field system is located in undulating grassland.[5]

A graveyard[6], mass-rock[7] and quarry[8] are identified but there is no further detail provided.