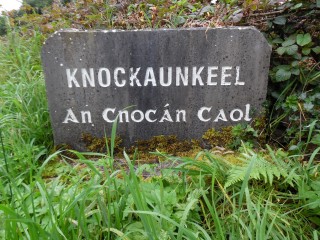 There is 1 monument in Knockaunkeel, a Ringfort.

The Ringfort lies on an east-facing slope of a gentle rise in otherwise low-lying grassland. The National Monument Archaeological Service states that it is a poorly preserved sub-circular rath (east-west 41m, north-south 39m) defined by 2 banks and an intervening fosse. A scarp (the side of a ditch cut nearest to and immediately below a rampart) forms the inner enclosing element from east-south-east through south to south-south-west. A field boundary overlies the outer bank from west to north-north-west. There is a gap on north side which appears original.[1]