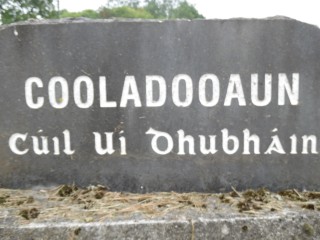 There is a ringfort and a standing stone in Cooladooaun.

The ringfort is situated in undulating grassland. This is a well preserved subcircular rath (running east to west for 35 metres, and from north to south for 30 metres) defined by a bank and external fosse. A number of small gaps in the enclosing element appear to be modern.[1]

The standing stone is situated on the north facing slope of a low rise in undulating grassland. It is an irregular shape, 1.6 metres in height which is made of sandstone. There are several small depression on its surface which are most likely due to erosion.[2]