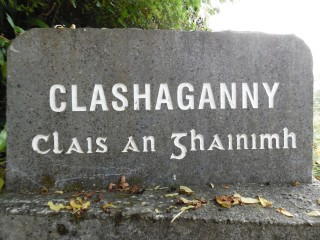 The first ringfort is situated on the south facing slope of a rise in undulating grassland. It is a well preserved subcircular rath defined by 2 banks and an intervening fosse.[1]

A second ringfort is situated on a rise on level grassland. It is a very poorly preserved originally circular rath defined by 2 banks and 2 fosses.[2]

A children’s burial ground is located within the south half of the ringfort (GA016-036—-). It is an irregular shape which appears to be enclosed from north to south east by a low stone wall. Numerous grassed-over limestone grave-markers are visible. According to local information, burials took place circa 1944.[3]

A field system is located on a rise in farmland. A series of earthworks cover and area and straddles a flowing stream. On the west bank of the stream, west of an enclosure is a deep linear fosse. A possible roadway, west direction, is flanked by earthen banks. On the east bank, 2 rectangular enclosures are visible, possibly small fields.[4]

An enclosure is situated on a rise in reclaimed pastureland overlooking bogland. It is marked on the 1st edition of the OS 6-inch map as a circular enclosure. No visible surface trace survives.[5]

The second enclosure is located on a rise in reclaimed farmland on the west bank of a stream. It is a poorly preserved D-shaped enclosure defined by a bank of earth. A series of earthworks (GA016-038—-) are associated with this enclosure.[6]