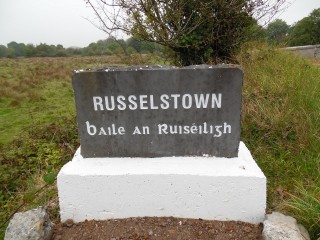 There are 3 monuments in Russelstown, 1 Ringfort (rath), 1 Enclosure and 1 Children’s Burial Ground.

The first monument is a ringfort (rath) lies on a slight rise in otherwise level grassland. The National Monument Archaeological Survey states that it is a poorly preserved circular rath (D 20m) defined by two banks and an intervening fosse. No visible surface trace of the enclosing elements survives from East through South to West. A number of small hollows occupy the South half of interior.[1]

The second monument is a Children’s Burial Ground which lies at the North-East end of a level field. An unenclosed artificial square mound (Length/Width 8.6m) on which numerous small set stones indicate graves oriented East-West. According to local information, burials took place here up to c. 55 years ago.)[2]

The third monument is an Enclosure which lies on top of a hillock in undulating pastureland. Marked on 3rd ed. of OS 6-inch map (1932) as a circular enclosure (Diameter c. 30m) cut by field banks at Southwest and Northwest. No visible surface trace survives.[3]