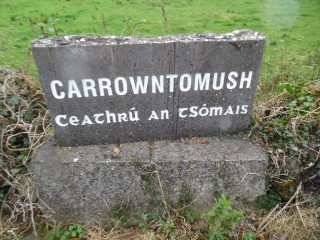 There is a high cross, church, Bullaun stone and an earthwork in Carrowntomush

An earthwork is located on a hillcock in farmland. It is situated 100 metres north of the sinking river. It is marked on the 3rd edition of OS 6 inch map (1932) as a linear scarp. No visible surface trace survives. [1]

A high cross has been fixed to the outer west wall of the graveyard. Its original location may have been on the summit of a hillcock but this has been quarried away. The head of the granite cross is unfinished. The short arms appear to spring from small solid ring. Both arms are decorated with volutes. One face bears the outline of a figure in high relief with drooping outstretched arms and the head tilted slightly over the right shoulder ; evidently an unfinished figure of Christ.[2]

A Bullaun stone is affixed to the graveyard wall.[4]