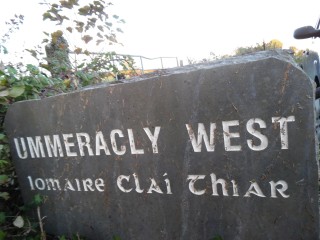 There is 1 ringfort and an earthwork situated in Ummeracly West

The earthwork is located in a level area of reclaimed pastureland. It is marked on the 3rd edition of OS 6-inch map (1932) as an oval enclosure with a small hollow. This hollow may have been a shallow quarry pit. Slight traces of a bank are visible on the summit of the earthwork.[1]

The ringfort is situated on a hummock in grassland. It is a poorly preserved subcircular rath.[2]