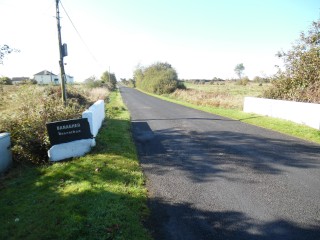 The first ringfort is situated on a prominent rise in grassland. It is a poorly preserved oval rath defined by a bank and external fosse.[1]

The second ringfort is located in undulating grassland. It is a well preserved circular rath defined by 2 banks and an intervening fosse. The inner bank is faced with stone. A well-defined stone-lined entrance is visible. There are a number of radiating earthen banks visible.[2]

The third ringfort is situated on a rise in grassland. It is a subcircular rath which is in fair condition, defined by a bank.[3]

The fourth ringfort is located in level grassland north east of a stream. It is a circular rath, in fair condition, defined by a bank.[4]

The first souterrain (L-shaped) is situated within the NW quadrant of a ringfort (GA016-006—-). This southerrain consisted of 2 chambers. A stone-lined hollow leads to the chamber. A possible creep is visible at the north west end. A 2nd possible chamber is visible beyond this through a gap in the roof lintels.[5]

The second souterrain is located approximately 10m NW of a ringfort (GA016-006—-). It consisted of ‘two chambers connected by a narrow doorway without a passage’.[6]