Story given to me by Nannie Pauline 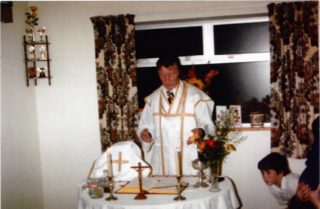 My nannie lives in the townland of Musicfield and Illaun. My nannie would have a mass in the house also known as the Stations. All the people from the area would be invited.

Nannie would be busy preparing for the mass. She would clean the house and sometimes paint the house. She would also bake a lot. She would bake cakes, breads, tarts and her yummy portercake.

All the people that would go to the mass would bring along some food. After mass they would eat the food and spend a long time talking.